"To Blues with Love" album reviews

BARB DIAB: LOVE IS ALL YOU NEED

They are Barb Diab and The Smoked Meat Band. Their first CD is called, ‘To Blues With Love’ and the official release of this took place last Thursday at the House of Jazz in Montreal. The high-class joint being  very appropriate for a high-class act.

Eight of the 13 songs are originals. With a few minor exceptions (CCR’s ‘Long As I Can See The Light’ and the Rolling Stones ‘Honky Tonk Women’) the album is exactly what the title implies, a love letter  to the Blues.  Smokey Robinson’s  ‘You Really Got A Hold On Me’? What the hell, not blues but close enough. Producer/musical director/guitarist, J.D. Slim gets the credit for almost  everything on the album except the graphics and the cover photos (and I wouldn’t be surprised if he could do those, too).

It’s all very straightforward and although there was really nothing extra added for the live performance it was far from ordinary. Diab actually voiced it (several times) but it seemed like all of them were as equally happy and excited to be part of this.

Having all the players ‘on the same page’ goes a long way to turning what might have  been an ordinary show into a great one.Some of the friends who appear on the album showed up to repeat their contributions for this show. Local Blues legend, Stephen Barry played bass on Gershwin’s ‘Summertime’ and Duke Ducas added his vocals to ‘Honky Tonk Women’.

The real test of any band, in any genre, is the originals.  ‘Everything Blues’ and ‘Blues For T-Model Ford’ are the first two on the CD and perfect examples of what blues is; a lot of the old, a lot of ‘today’ and nothing directly copied.On the subject of writing a blues song, Stephen Barry once said, ‘I’m a white guy from Lachine. I’m not going to write about picking cotton. It would be ridiculous.’ Like most of the good ones, Diab and The Smoked Meat Band instinctively know this.

‘To Blues With Love’ by Barbara Diab and The Smoked Meat Band. Every home should have one. Available at CD Baby and iTunes but go see them live and get one directly from the source. 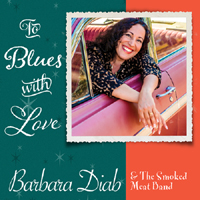